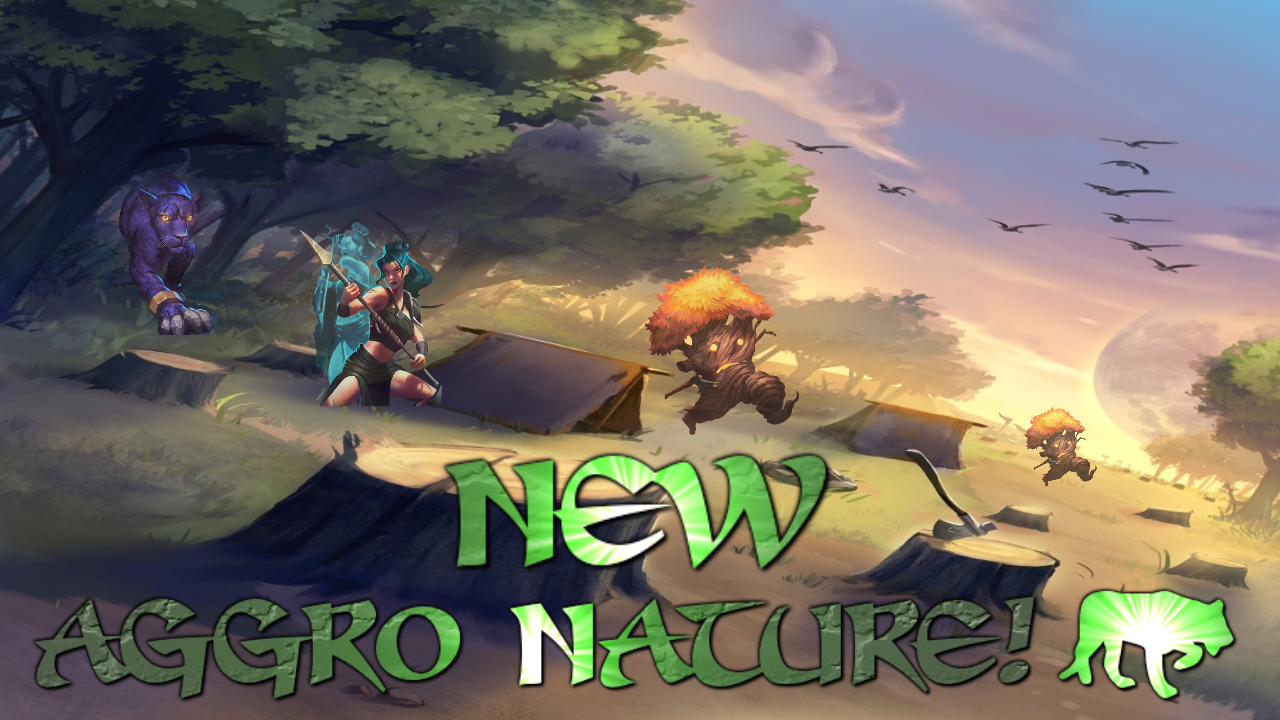 So in the last weekend ranked, I used the control magic deck that I posted about in my last post, and I was able to get 14/25 wins which is pretty nice although I could have gotten better to be honest. Now after getting the 14 wins on Sunday, I was a little bit short on time to get the rest of the 16 wins for the "What a Mortal" price pack, but I tried anyway as much as possible.

Now since control is a very slow type of deck, I reached Sunday night, with as many matches played as I can with 11 wins remaining and only a couple of hours available to play on Monday. Now I think with war aggro relic decks it was kind of easy to get them, however I lack a lot of cards for such decks and I did not have any gods. But I did not give up and I decided to try the new Aggro nature and try my best to get those 11 wins in the time I had left, since first of all it way faster than control, and second of all it has been a while since I have played nature.

And boy did this deck not disappoint! I was able to get those 11 wins in just 3 hours which is insane for me since I needed days to get 19! The deck did very well since I started playing it, then I struggled to get the last 2 wins since it was a race with time. So in this post I will be sharing this deck with you and giving my thoughts about it! 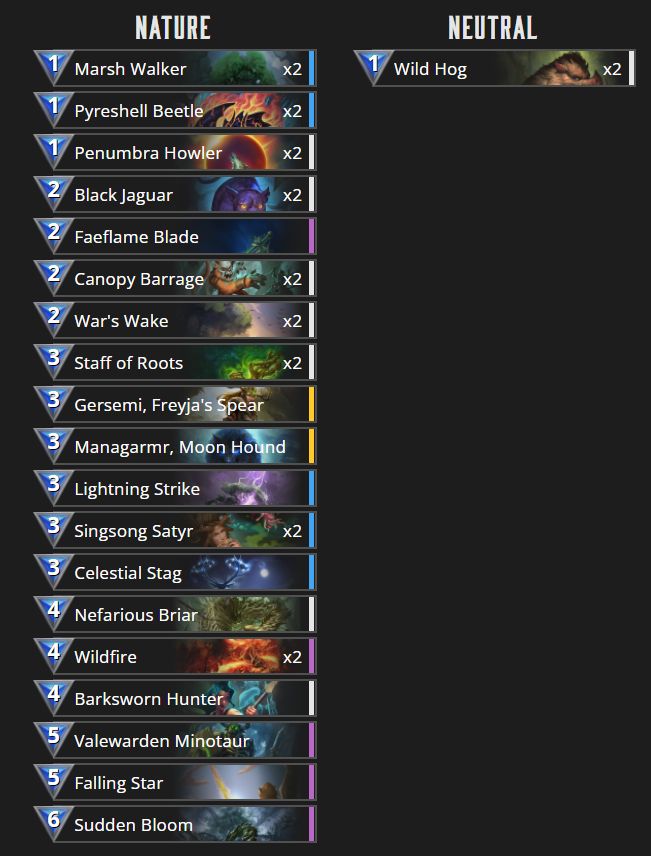 The deck was almost like any classic aggro deck in this meta, except that I was missing a couple of good cards that I will be talking about later on. The good thing about it is that usually games don't take long either I was able to establish board early on and end the game, or just could not and I conceded to save time since the result was pretty obvious.

I had a bit of difficulty first couple of games getting back to the aggro mentality but as soon as the games got going wins started to flow and I got 5-6 wins in a matter of 30 mins which was huge for me! So let us see now what were the cards missing that I would love to have had in this deck: 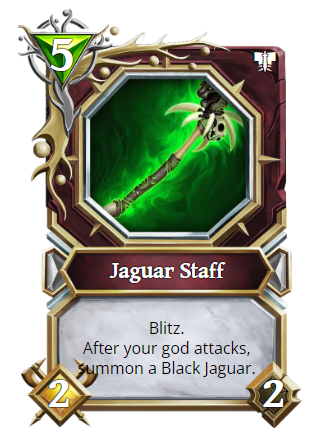 This card is insane in this deck for the 5 mana spot; not only the clearance it provides and only the 2 Black Jags are insane to build up the board again and take back control or even dominating the board more to seal the deal. It gotten a lot cheaper now but unfortunately I did not own any gods to buy it at this moment. 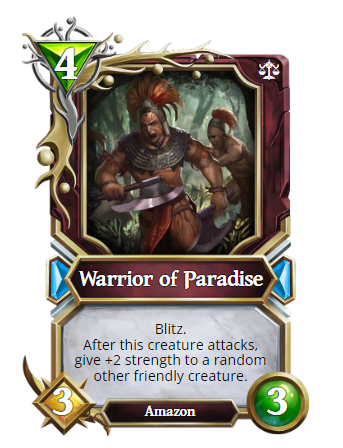 Since this deck is all about aggressiveness, the strength and clearance provided by this card since it is a blitz card is very useful I would say so I would have loved to have it added here as well. It costs 3 gods only now, but still did not have the funds to buy it at the moment but a good card to have here! 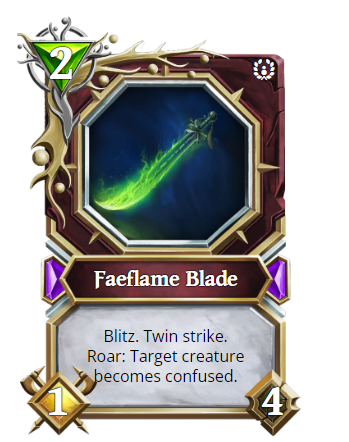 Ever since I started playing this game, I only got 1 faeflame and never bought a second one because it is a core card and still waiting to get that second one. Another faeflame would be a great addition here for more clearance early on and help establishing board.

Now let us see what cards did I replace those with in my deck and what are the ideal replacements for them for a more expensive budget:

My replacements vs Ideal ones

Now let's start first with the first card which is the Jaguar Staff. To replace it from my collection I used Barkswon Hunter. 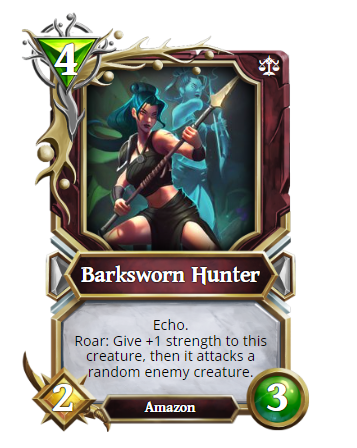 Now although it no longer hits face, this was my best option in my opinion to provide more instant clearance with a small change of surviving and staying on board alongside the 2 more clearing damage provided from it's echo.

The ideal play here would be to add the Jaguar Staff itself since it is not very expensive and it's the optimal card for this deck in this situation.

Now the second card that I had to replace was the Warrior of Paradise and I used Gersemi in its place. 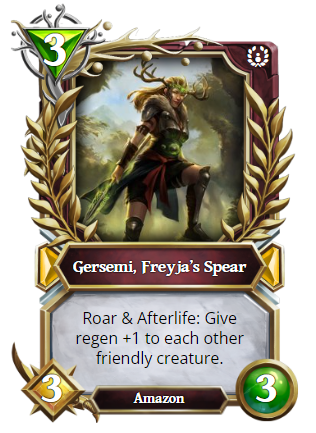 This was the best option in my collection as it was a decent 3/3 creature on board for 3 mana that can also get more regen to my cards especially for War's Wake and get them to full health faster. I know it was not ideal but this was best option. And ideal and insane replacement for an expensive deck would be Dagan, the Dawn Wolf. 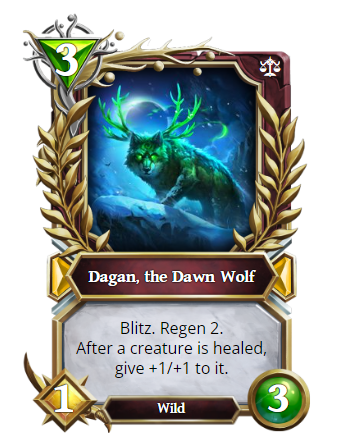 This card is selling now at 110 GODS for a reason! It's not only because of the market crash, but also because it is insanely valuable in this deck. A lot of cards have regen in this deck and the instant buff that can be provided for them with this card is game changing! So definitely a must add if you own it!

Now the third and last card to replace would be the Faeflame Blade. In my case I used another Staff of Roots to replace it which is a good replacement. But for an ideal and more expensive option the Underbrush Board here would be an amazing option. 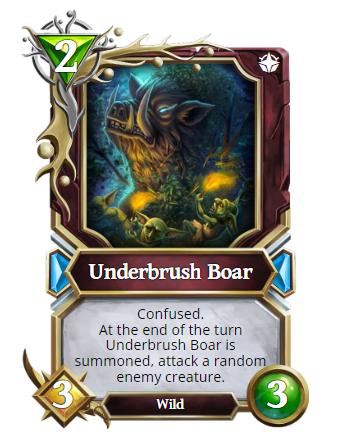 The instant clearance it provides as well as having a decent chance to survive at 2 mana and thus having 1 more body on board is very good here. So this would be the best expensive option here in my opinion.

Now a lot of my games were decided by who got first turn, and this is something I wanted to talk about now since it is everyone's talk nowadays and how broken it is to go first especially as an aggro deck. Now as much as I do agree to this statement, I think it is part of every card game for a player to go first and the second one to go after and I do not know how this thing might chance. It is part of every card game since they are one turn at a time. Now I thought of a few suggestions that I do not know how they might affect the game concerning this since I do not have much experience, but I will go ahead and state them since they made a bit of sense for me.

I thought of 3 possible things to do for this part and each one might have a different effect on the game and they might not even be optimal as well, and these suggestions are:

Now these were 3 suggestions I thought about concerning going first and I do not know how they might affect the game considering I do not have much experience. So be sure to let me know what you think about them and I hope they can reach the dev team so they can analyze them with their experience and see if they are any good.

I enjoyed playing nature again so much, and I was very happy at how much this helped me get my required wins so fast especially that the deck started out excellently the first 15 games! Although now it is struggling a little bit because everyone is used to it and countering it, it served its purpose to me and it is still a deck I would use whenever I need a change from magic or I need fast wins.

Of course not having played aggro for a while made me do several mistakes and I could improve a lot on my gameplay from this side, but I also was able to reach 1480 in mythic with it which is pretty good for first timing aggro in a while. There is also the factor of going first which influences a lot of games and I hope my suggestions help in any way or the devs can come up with something to make it a little bit less broken if I can say so.

That was it for this post, I hope everyone's weekend games went really well and if you are a nature aggro decks fan be sure to try this one out as far as it looks very similar to all classic aggro nature decks out there, switching up a couple of cards can change many things and also not make the game feel boring and repetitive. Also be sure to let me know what you think about this deck and about the suggestions I made for going first and I will see you all on the next one!

Good deck to try... Alas, I have already spent this week's GODS for some old cards ... So I have no MJ ones for this deck. Maybe next week.

I am playing a zombie deck but I can't reach Mythic.

So many bugs. Especially "nice" to lose a rank because of a bug. :( I am wishing that they fix all these bugs before they release it on mbile they are really annoying! Been a while since I played zombies hope you re enjoying it!

I haven't had the chance to give wars wake a shot, is it worth it? One thing to note, I feel this deck may struggle against magic decks that are running rampant.

That's where the part of going first comes into play. War's wake is so good if you go first and play it first turn they get the chance to heal and defend the ramparts won't kill them. On the other hand if they went first you re basically fucked. And in general this deck does a lot better when you have first turn.

War's wake looks mediocre on the surface, 2 1/2s die easily, but your opponent has to deal with them quickly otherwise they can get buffed up and regen back the health.

Nice write up! Nature has so many good cards, it's not the end of the world if you don't have the absolute best. I do love Jag Staffs.

I particularly like your inclusion of Sudden Bloom. You already have 7 (!) board buff cards to reward yourself if you get wide, but SB gives you a win condition even if you only have 1 creature in play. You also have enough non-confused creatures to make it workable. My only concern is that you might want to scale back your board buffs to 5 or so and get some 4+ HP creatures in the deck. Rabid Bears come to mind.

Thank for the comment ill definitely try adding more tanky mid game creature and see how it goes thanks for the advice!