When a Hive blogger is also a published author: how blessed can we be? Yahia Lababidi’s “Learning to Pray"

While "book review" generally connotes a reader who picks up a book, reads words, rates the book on a scale of one to five, and writes a summary and a personal judgment, that is not how I approach it. To me books are living things, companions, friends, and Yahia Lababidi’s Learning to Pray: a Book of Longing is just such a companion.

It speaks to me. 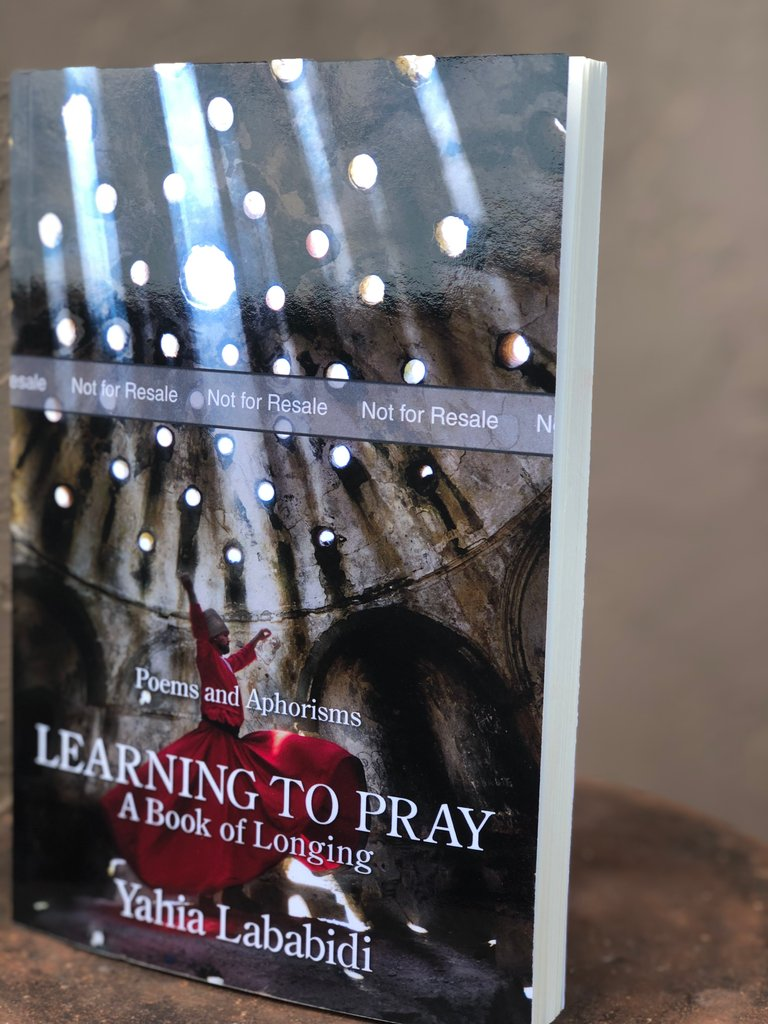 “The contemplative life is not a passive one.”

Of all the aphorisms and poems in Learning to Pray: a Book of Longing, that line shines as bright and energizing as a sunbeam breaking through the clouds. It sounds paradoxical to think of the quiet thinker in the corner of the room as the most active person there, but to the avid reader, daydreamer, poet, or philosopher, it makes perfect sense.

Also, just look at the cover of this book, that stunning, vivid image of the Sufi dancer in red, a “whirling dervish” if you will. All that energy, all that vitality, all that passion and joy: How do you judge a book of “longing” by its cover when it conveys such a glorious sense of motion, such a visual feast of ecstasy?

You don’t “judge” the book; you embrace it. You drink the words as a parched flower takes in rainwater. You internalize the insights of that quiet, contemplative poet whose inner life is as rich and ebullient as the “outer” life of that dancer on the cover.

“Poor rational mind, it would sooner accept a believable lie than an incredible truth.”

Lababidi nails the cause of my conundrum before I can pin it down in my mind. His grasp of duality and the seemingly paradoxical brings to mind Walt Whitman’s "Do I contradict myself? Very well then I contradict myself, (I am large, I contain multitudes)" in “Leaves of Grass.” 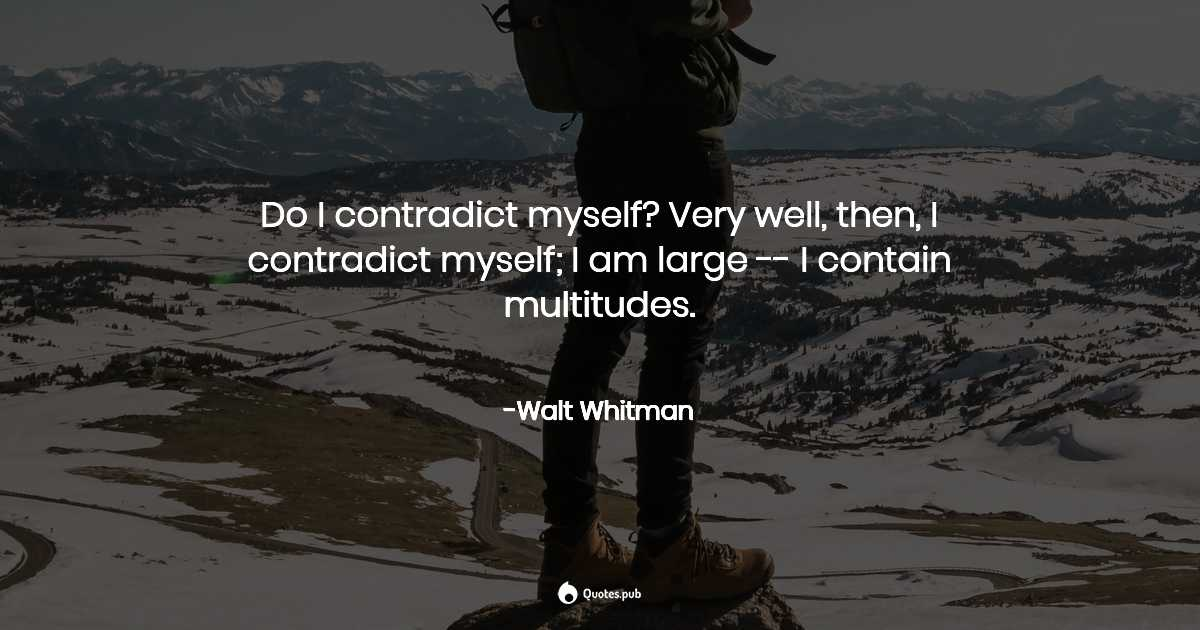 Lababidi illuminates another paradox in the preface:

“Mysteriously, certain strains of literary art are capable of using words to lose words—ushering us to the threshold of that quiet capital of riches: Silence. After all, it is in silent contemplation that difficulties patiently unfurl and entrust us with their secrets.” There it is again, that sense of so much happening, so many problems solved, in the mind of that seemingly inactive person—and there it is again, that sense of paradox: tuning out words to hear secrets revealed in silence? Writers who sing the praises of silence—what is this? Nietzsche knew: “The author must keep his mouth shut when his work starts to speak.” At some point, after unleashing those busy little beings known as words, the author steps aside. This, Yahia manifests, too.

“In these skeptical times, there still exists an Absolute Literature,” Lababidi tells us in the preface. As a kind of corrective to our fractured world, “more people are reading and writing literature that addresses the life of the spirit,” and the dancing words of the poet take our longing and transform it into a kind of love letter to the Divine. And that brings me back to the image of the Sufi dancer, showing us that “longing” is not the final word. Its companions, conflicting as they may seem, are passion, joy, rapture, and ecstasy. Feeling like an exile is universal, but it’s not the last stage of the journey. If we feel uprooted, the poet can ground us again.

There’s more, much more, including “the worship of beauty as a form of prayer,” but soon I would be copy/pasting the entire Preface here, and all the poems, because every word needs to be heard and shared.

But I must include this: “Reverence for the visible word is not in opposition to the invisible one,” for in that word “opposition,” I see that Lababidi has reconciled the various and many conflicting elements that afflict those who are aware of them.

His poem “The Lighthouse” says it better than I can:

In the dark, a poet will climb
narrow, unsteady stairs
to gaze past crashing waves
and sing us new horizons

Others, less far-sighted, might
be deceived by the encroaching night mistake the black for lasting, but not….

But wait. One image (metaphor) is so exquisite, I have to include it here:

One day, I’ll finally slip out this loosening body bag
Simply sling it over the shoulder of my sturdy spirit.

NOTE: Thank you to the author and Kelsay Books, an independent literary press run by Karen Kelsay, for an ARC of this book.

Disclaimer: This is not a book review. Do I need to say that? I've been downvoted in other Hive communities for writing a post that compared three different authors and how I reacted to them on a personal level. Are BOOKS and "reviews" prohibited by some communities? My bad, for failing to find and read the rules.

UPDATE: Amazon did not reject my review! Monday, I had written,

NOTE TO AMAZON: If you reject my review based on "Violations" of your "Friends and Family" clause, please know that as a reader, I regard all authors, dead or living, as my "friends" and companions, even soul mates, and if I promote their books, it is because I would love to find fellow readers to share impressions with. Sure, there's this business of book sales, and that smarmy thing that happened in the early days of ebooks, when self-published authors got their friends to post gushing 5-star reviews of books they probably didn't even read. I am not one of those readers. My impressions are based on actually READING books, and reacting to them, and sharing my thoughts with others.

We are receiving increasing numbers of complaints from authors about Amazon rejecting legitimate reviews for their books. Amazon seems to have found a way to determine if someone reviewing your book is your friend, neighbor, or even a previous co-worker.

One author in particular released a new book, and ran ads on social media. Of course, everyone on his social media accounts knew him. Some of them purchased his book, and then submitted reviews to Amazon. He reported that almost all of the reviews were rejected by Amazon.

Have you ever talked to someone about a certain topic, with your phone in your pocket, and later noticed an ad in your browser or a social media site that’s related to the item you were discussing? That has happened to me on numerous occasions. And, yes, your smartphone really is listening.

Amazon doesn’t like it when authors’ relatives submit book reviews for an author’s book because, of course, they assume it’s biased. But, it seems Amazon’s book review police have gone overboard in rejecting book reviews. We’re not sure how Amazon might know that a particular buyer is your relative, a neighbor, an old co-worker, or a friend of a friend who saw a Facebook post. Perhaps they are monitoring your social media accounts. Perhaps they know which reader reviews were submitted by someone who lives near you, or someone you previously shipped an Amazon gift to? We really have no idea. Regardless, there is a way around this.

See more here:
IS AMAZON REJECTING BOOK REVIEWS FROM YOUR READERS? We Found a Work-Around! by Angela Hoy

Ill dare to say again: This is not a book review.

And now, I'm back to my online search for a writer named Hurnand, quoted in my 1962 book of Aphorisms selected by W.H. Auden and Louis Kronenberger.

“A poet puts the world into a nutshell”

We are fortunate to have among us a poet who packs more into that nutshell than almost all other bloggers combined.

So, grateful to read this, dear @carolkean, and to be seen with such enthusiasm! For me, too, books are living things and they go out and make their own friends :)

Thank you, for allowing my new book to speak for itself. I assure you, as the "author" of this collection, I'm still learning from it -- as well as perceptive reviewers.. I mean, readers :P such as yourself!

It's an honor to be likened to the vast spirit of Walt Whitman and, more personally, especially meaningful for me to know that my poetry helped you with your grieving over your dear sister.

This, I believe, is the highest function of all art, to heal our soul and remind us --amid all that perishes in this world-- of what is Indestructible. 🙏🌟

$0.10
1 vote
Reply
[-]
poshtoken (72) last month
The rewards earned on this comment will go directly to the person sharing the post on Twitter as long as they are registered with @poshtoken. Sign up at https://hiveposh.com.
$0.00
Reply
[-]
ecency (73) last month

Thank you for upvote and encouragement!

This is quite interesting...))
Thanks!

Nobody reviews (er, discusses) books like you do Carol. Yahia is a very inspiring writer to be sure, but you've made his book of mystical poetry reachable.

I'm confused though - amazon gave you grief about this one too?

Thanks @owasco! Actually, much to my surprise, Amazon PUBLISHED my this time. But Amazon has yet to restore a thousand reviews they purged, and there's no way all of those violated their Friends and Family policy. I had but to follow someone on Twitter to be accused of that "violation." Well that makes me feel violated. [cue the mad face emoji]

I published this here thinking I'd never be allowed to post on Amazon. If they want to sell books, and collect 30% or more from self-pubbed authors, they should stop banning my reviews.
End of rant.
Thanks again for reading and commenting.