There's a lot of random news floating around out there that needs to be reported on. First of all this SWIFT FUD, which is either being underreported or overreported depending on the truth of the matter: 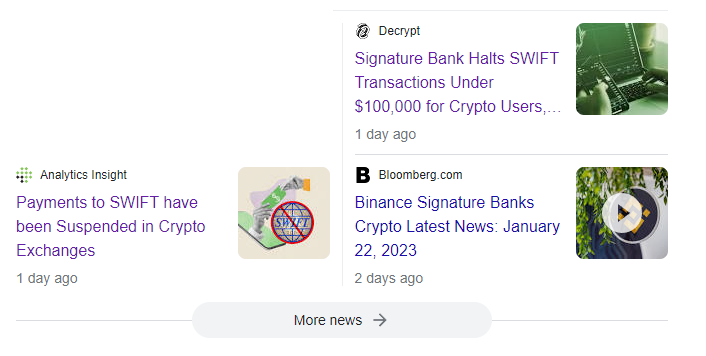 Binance stressed that credit and debit card payments will continue to be accepted and that non-USD bank transfers would still be processed through the SWIFT payment system.

Payments to SWIFT have been suspended: The SWIFT payment network has made an extraordinary decision that will have far-reaching implications for cryptocurrencies. Asia Markets may reveal that SWIFT will no longer process fiat currency transfers from bank accounts to cryptocurrency exchanges, valued at less than USD 100,000, effective February 1, 2023.

Asia Markets can reveal banks, including New York’s Signature Bank, will no longer process fiat currency transfers to cryptocurrency exchanges with a value of less than US$100,000 via the SWIFT network, effective from February 1, 2023.

The move will thwart cryptocurrency access to potentially thousands of customers.

Oh no, is crypto dying?

Is SWIFT doing to cut off a ton of banks from accessing crypto on FEB 1? I mean they might, but even the worst reports claim that only "thousands" will be affected. Kinda sounds like a big nothing-burger to me, but it might turn into something... you never know.

I often look at the bullish scenarios, so it's important to pull back from that and look at other things that are going on. However, all we know for certain at this point is that Signature Bank... a bank that provides 0.01% of Binance's business, is going to limit SWIFT transfers to only large transfers. However, if credit and debit card payments are still going to be processed, is this simply much ado about nothing? Kinda seems like it, but the FUDsters and bears love it. We only need to wait a week to find out for sure. 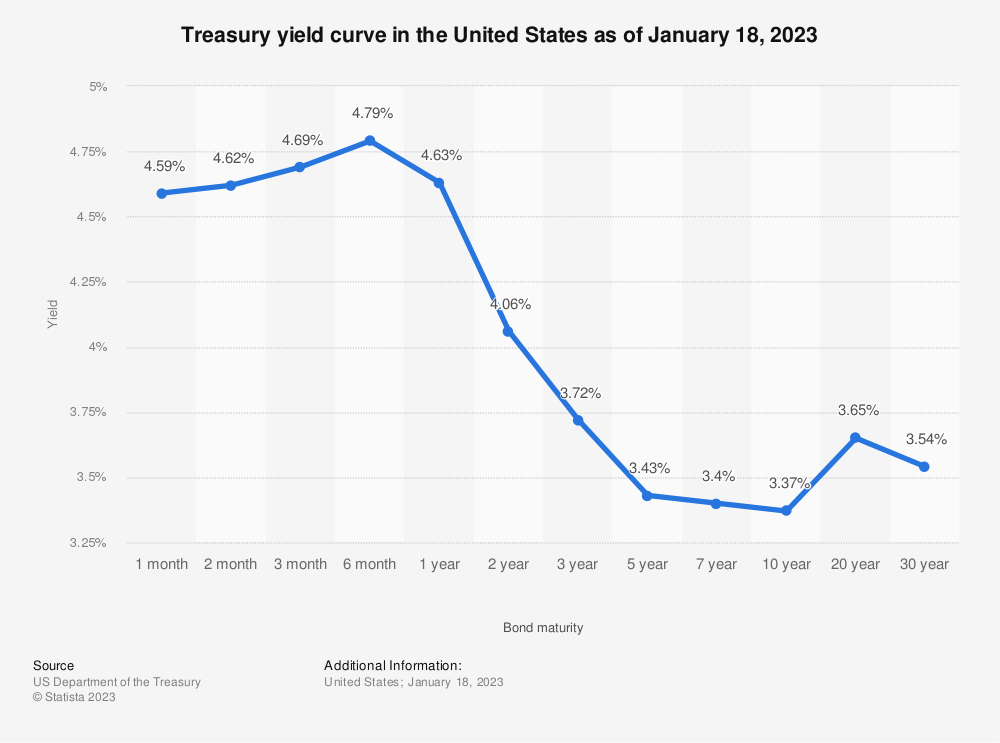 Yield curve says it all.

When the yield curve looks like absolute hammered dogshit, the money is telling us what is going to happen. Explain why someone would lock up their money with the government for 30 years when they can get a better deal at one month? LOL... they... wouldn't? Duh. The short-term stuff is being dumped because people would rather have the liquid cash.

All of this points to a complete lack of growth in 2023, which in turn implies that the FED's war against inflation is a completely false crusade. I will continue to maintain that they are trying to create a toxic deflationary environment on purpose so that all the cronies can buy the bottom in a fantastically orchestrated transfer of wealth.

Something tells me that this market manipulation is actually going much worse than planned. Powell keeps coming up with reasons for why the FED's fund rate needs to be increased further, when it is so so obvious that this is part of the problem. 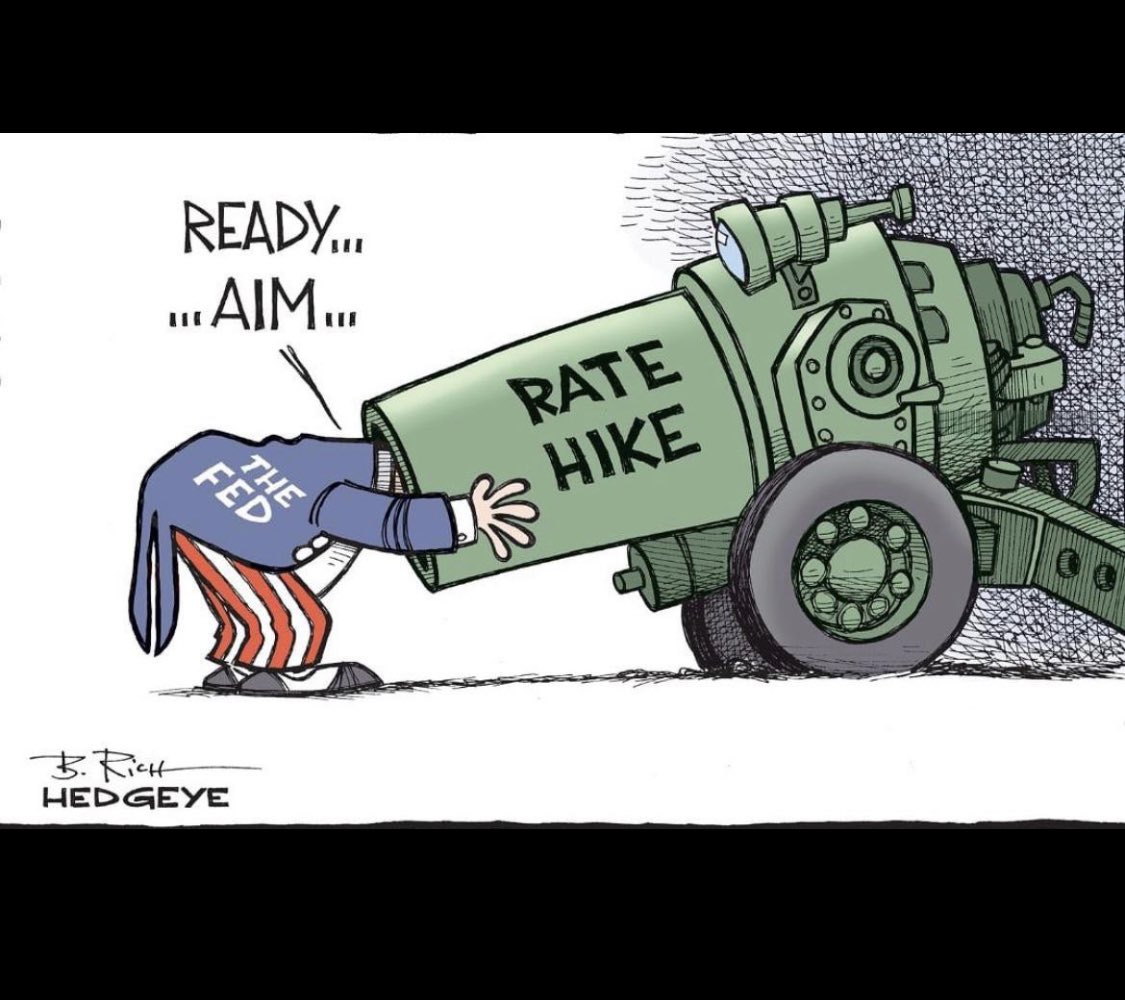 In an actual reactive scenario, it would make sense that the bear market would not end until the FED makes a full reversal back to 0%. That's because all the moves they've made this far were justified, but manipulating rates comes with a 12 month delay. Why? Because APRs, by definition, take 12 months to actually do the thing that the number on the screen implies.

Catastrophic events don't happen when people see them coming a mile away. That is the situation we are in now.

If the FED is not acting reactively, and instead are fueling the fire and are part of the problem... the second they pivot: we are going to be out of the bear market and into a bull market, and the rest of the economy will probably be completely fucked for like two more years. Which one of these scenarios is more likely? The latter has never happened before, but it seems like the chance of it happening is more likely than ever.

There's really nothing we can do but try to weather the storm. Those who prepared for the storm in advance were well rewarded, but as we can see: it is not possible to prepare for a storm during the storm. All the bears have been absolutely crushed by the recent pump, and they are all crying about market manipulation and how this pump isn't "organic". The lack of responsible adults in this space will never cease to amuse. I should know because I'm one of them. 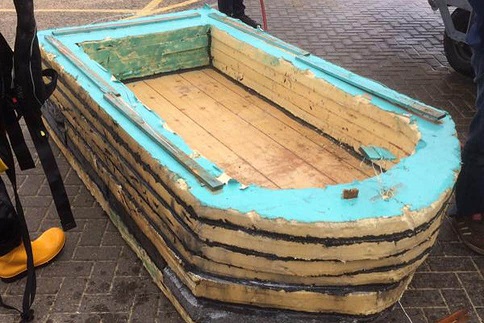 So now that we find ourselves in the middle of the storm all we can do in cling onto our lifeboats for dear life and hope to god they don't sink. It really is as simple as that. Trading on leverage is OUT OF THE QUESTION in both directions. Don't do it. That's degen bullshit right there. If the inevitable x10+ we get isn't enough for you within the next 3 years, you need to reevaluate your lifestyle and make changes accordingly.

There is also the issue of the next FOMC meeting and CPI report for January (that comes in mid FEB).

Bears are claiming that earning reports are going to be bad, that the CPI report is going to be bad, that Powell will continue his crusade against inflation, and that we are all basically fucked all over again. I mean they might be right... the stock market is flirting with a scary resistance line right now. Could easily happen, but I'm not so sure.

I personally don't believe there is any reason to believe that any real inflation is going to occur, especially on the money supply side of things. How many of you are getting credit card offers for 27% APR? lol... think about it. That's wild. Projections for credit card default are double what they usually are in 2023. That's significant. Extrapolate that out to all the other debt out there and it's so obvious that 2023 will not be a year of growth, and thus will not be a year of inflation either.

Most are not willing to admit this: but they believe that prices are just going to keep going to go up regardless of all this data that points to the contrary. Sure, that could happen if we keep getting hammered by supply disruptions and cost-push inflation of goods and services, but also... in order to hold this viewpoint many are actively thinking some act of God is going to strike all over again. Is that what you want to be betting on right now? Some random event that will kick us while we are down. Of course it could happen, but is it likely? And if it is likely, will it even affect an already deflationary economy with this kind of momentum? These are the questions we must ask.

Will SWIFT cut off access to crypto? In the long run this would probably be a good thing and there are many ways around such an event. However in the short term no one wants to hear this because the short-term losses would be very hard to stomach. At the end of the day if SWIFT is only making big $100k transactions to and from exchanges... well that kind of just incentivizes banks to be custodians of Bitcoin as well. Like I said, it could evolve into even more reason for institutions to hold BTC permanently. I honestly wouldn't worry about it. Bears are looking for any justification to continue shorting right now. No matter what happens they're going to get burned, even if Bitcoin fills the futures gap at $20k. Infinite greed guarantees it.

The FED fund rate and the bond yield curve and tech layoffs confirm that 2023 is not a year for growth. It's a year of deflation and reversals. While the physical markets and plebs living paycheck to paycheck are in for a very unpleasant ride, digital markets might do quite well despite all of it. Markets are irrational, greedy, and speculative, and if they can see the light at the end of the tunnel, that's a bull market: Even if we are still inside of the tunnel.

Hive has been having like 16 green candles in a row which has never happened. Golden crosses incoming. I am guessing a pump to at least 60 cents is imminent (before the usual dump)

The momentum is certainly there.
We were above 50 cents before FTX collapse.
Recovery will happen sooner or later.

Of course they will pivot, I don't think they have enough credit to keep like this three years more if they don't want to see a guillotine in front of their houses.

This 100K FUD should have not even been mentioned in the news, is one bank, with 0.01% of the accounts involved. My opinion.

bear season has been for too long, we appreciate the buy point, we want bull season to last, even for a month.

This SWIFT thing might be a bummer for some people, but don't forget that there are still other ways to buy crypto. Plus, the bank involved isn't even that big of a deal for Binance. As for the Fed, who knows what they're really up to, but let's just wait and see how everything plays out.

The yield curve is screaming economic downturn in 2023. Coincidentally, Biden and members of Congress don’t have to face the electorate this year.

I'm no genius, but wouldn't SWIFT not allowing USD transfers just incentivize these places to transfer with a different currency? Like Bitcoin or ETH for example. Or more likely, Tether or some other stable. Like I said, I am definitely no expert but it just seems like they would have to explore that and find out it's cheaper and faster and cuts out a middle man or six.

Exactly I'm not quite sure how it would go down either.
Clients make demands.
One of those demands is a crypto/fiat ramp.
Those who ignore demands will lose business.
With exponential crypto adoption this becomes unacceptable.

This in turn highly incentivizes all retail banks to become Bitcoin custodians.
There are many other reasons for them to do this anyway.
They can sell BTC directly to customers.
And many of those customers won't even withdraw their BTC from the bank vault.
Fractional reserve banking becomes stronger and everyone wins (except the SWIFT network).

The way @taskmaster4450 was it and the way I am beginning to look at it is that there are a lot of benefits to the crypto market in the long run. Small-scale investments may reduce, I say may because there visa cards from other banks that are not under SWIFT are not affected.

So far the market has not adjusted to any of these changes...at least to my knowledge but I don't know if it will be a major one or not.