IMF's Continuous Efforts To Present CBDCs As A Better Alternative

geekgirl (77)in LeoFinance • 2 months ago 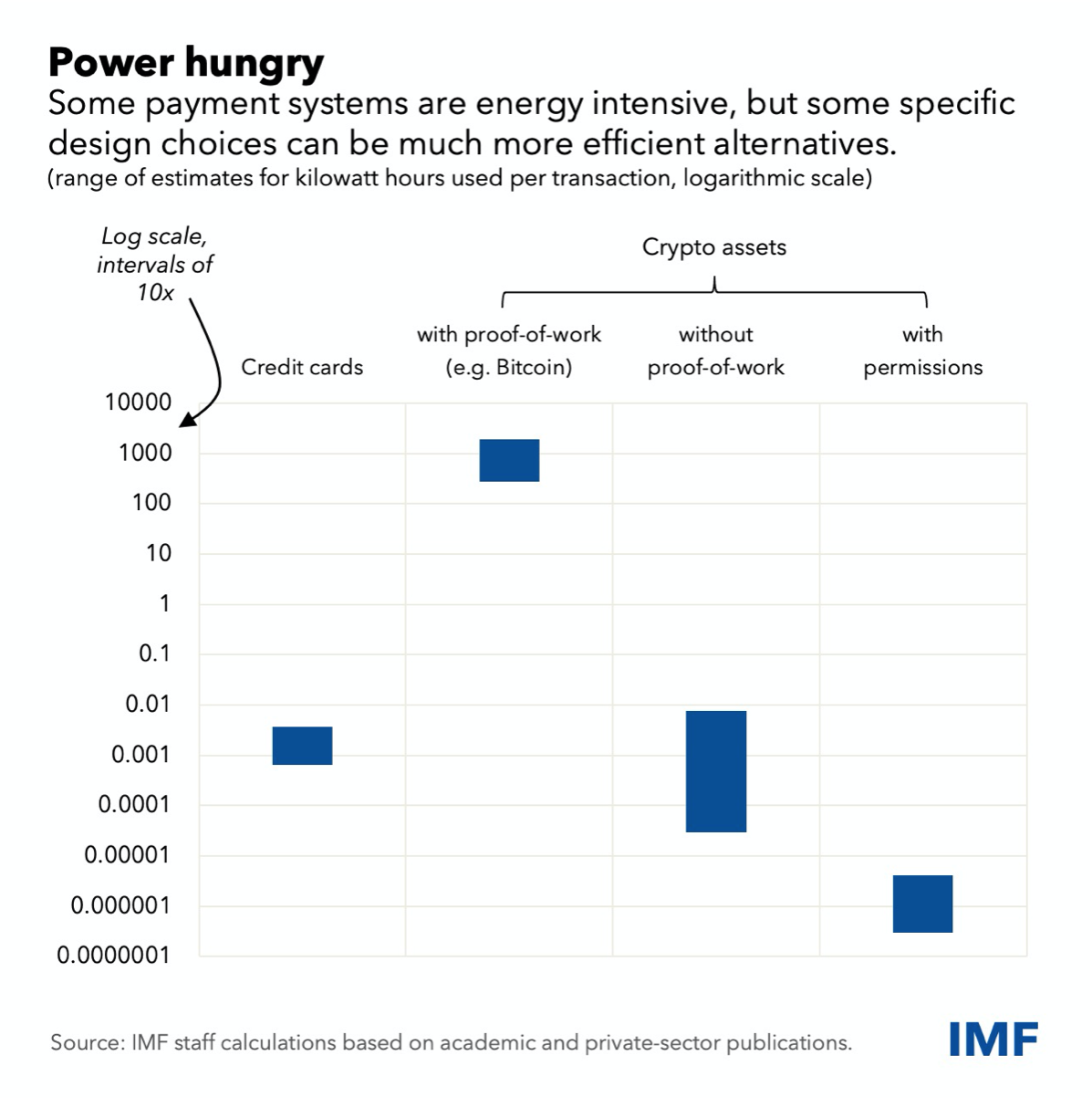 Ever since bitcoin was adopted as legal tender in El Salvador IMF and international bankers have been busy discrediting bitcoin and other permissionless crypto networks. Last year there was a flood of articles, studies, and announcements from international and central bankers about CBDCs. These actions looked like coordinated efforts to push the idea of CBDCs and portray them as same thing as rest of crypto. They have been using sophisticated tactics by trying to show they genuinely believe in blockchain technologies and their role in the transformation of the financial systems. At the same time they would publish articles and studies that would present bitcoin as a threat to the stability of economies and often warn against adoption of policies that make it easy for people to use it.

Their opposition against bitcoin has been evident by their criticism of El Salvador's bitcoin law, and World Bank's decline to provide any assistance. They have been working hard to prevent any other countries taking the same path as well. One of the examples is the renegotiation of Argentines debt, and more loans that included conditions against crypto. IMF, World Bank, and other international bankers claim their roles as to assist developing nations, but in my opinion they have done more damage than any good. Now, when new technology emerges that has a promise of alternative solutions for financial systems and stability that actually may benefit many nation states, of course IMF wouldn't want to see that.

There is an article published on IMFBlog, dated July 16, with a very clever title How Crypto and CBDCs Can Use Less Energy Than Existing Payment Systems. The first problem with this title is they are misleading with presenting Crypto and CBDC as the same things. I do not consider CBDC crypto. They don't even call CBDC a "cryptocurrency". As the name suggest CBDCs are just digital currencies. Digital doesn't necessarily mean crypto. They may use blockchain or distributed ledger or any other technology that might make the transfers faster and more efficient. However, two characteristics of CBDC disqualify them to be crypto or even anything close to crypto - being with permission systems, and being closed systems.

The other deception of the article is that they are using the same old excessive use of energy argument and trying to make a case that "with permission" systems are a lot better because they use much less energy. You can even see what they are trying to convey in the chart above. They no longer are making a case for traditional systems like credit cards. They clearly show CBDCs are the best. If you care about environment, you are suppose to choose this option. This is the only best option forward.

If you look at the chart or read the article, their claim is Proof-Of-Work based systems, and more specifically bitcoin is good option because of high energy use. These claims have been debunked many times already. Yes, bitcoin and other Proof-Of-Work system use a lot of energy. But the use of energy is the most efficient and they derive the highest value of this energy use compared to any other energy use in the world.

The article mainly focuses on payment systems and completely disregard store of value benefits. Many in crypto would agree there are better alternatives in crypto world to be used as payment systems. One of the great examples is Hive network. Feeless, fast, permissionless, and has a working stable-coin. Of course they wouldn't mention anything like this. I would even argue Hive would easily compete in terms of energy use with these "with permission" systems. I am pretty sure Hive witnesses use much less energy than any of these banks.

What do CBDCs really offer? What is so unique and new about them? I think nothing. Central banks currencies became digital long time ago. We just didn't call them that before. The only new things seems they are starting to call them digital currencies now. But nothing is changing when it comes to trust. We still need to continue to trust central banks to do the right thing. But they just play their games and let people pay the consequences. Ok, I will be fair. I will buy into the idea of CBDC. If they at the very least introduce one thing. Transparency. Keep them centralized, keep them "with permission". But the least you can do is make them open networks , and have all transactions available to be seen and audited by anybody. Too much to ask? or too much to lose?

Many CBDC projects build on energy efficient distributed-ledger systems under which only permissioned institutions like commercial banks can join and validate without proof-of-work.

Sure this could work. Somehow I really doubt Federal Reserve or Bank of England will make this ledger public. Now that would be an innovation and step in the right direction.

The article seems to be written for central banks and policymakers to consider as a guide as we continue seeing public discourse on the topic, as lawmakers from various countries continue to explore the benefits and risks of bitcoin and other cryptocurrencies. It is Ok to have fair competition. International bankers pushing the idea of CBDC or other centralized solutions are welcome. The problem is they don't play fair. There is no free market competition. They leverage their ability of giving loans to influence politicians and lawmakers.

Bitcoin and crypto is not going anywhere. Central bankers and international bankers have come to the realization of this fact as well. I will take it as win for bitcoin.

"The root problem with conventional currency is all the trust that's required to make it work. The central bank must be trusted not to debase the currency, but the history of fiat currencies is full of breaches of that trust."
~ Satoshi Nakamoto

Transparency would be nice but alas, I don't think it will ever happen with anything that central banks are involved in.

Great read as usual. I get all my bitcoin and crypto related news from you - you always keep me informed. Thanks for that 😁

lol, I am the worst source for news on crypto or anything. Just don't make any financial decisions.

Haha no never. I rely on youtube videos to make all my financial decisions. My portfolio is made up of so many shitcoins that are going to increase 1000X 🚀 that I'll be able to buy a Lambo by Christmas. It's gonna be awesome...

Youtube videos are the best for investment decisions! I do the same. lol.

Great article. It would be nice if most of the no coiners would have access to it so they should understand why CBDCs are rat poison and why Bitcoin and other crypto are the best money we had so far.

That's why Hive is a great playground to practice using crypto, if people only understood.

Banking systems worldwide need to adapt more to the needs of their users and less to those of their owners. The user wants ownership, just as you shared it, the user wants autonomy. The war to discredit cryptocurrencies is palpable. However, the reality is that there is a great trend and their struggle is of little use when each country now wants to get its own currency, but not so ingenious as to please the autonomy they want. They themselves were the promoters of an evolution in banking systems due to their loss of credibility.

That's why I love hive for its self-sustaining possibilities.

It will take some more time for countries to realize the benefits of utilizing decentralized systems for their economies. Many are at the mercy of international bankers like IMF and World Bank, because that's how they get the loans, don't pay back and pass the debt to the next generations.

It's obvious that the government and politicians want to maintain control. I prefer a decentralized and transparent blockchain over their CBDC any day. I would prefer that the government did not have the power to shut down my bank account at anytime

Yes, CBDC can't really compete with the likes of bitcoin.

Bitcoin and other alternative coins won't and can't die no matter the propaganda from the traditional banking system on paper they would write against Bitcoin but in reality they're heavily investing on crypto currencies in private and even. It's a bigger victory for Bitcoin.

Good points. Decentralized networks can't be stopped and you are right even though they publicly work against bitcoin, privately might be accumulating.

I'm very sure about this point, scarcely would there be any bank manager who's not holding a certain cryptocurrency for personal gain. I learned about cryptocurrency from my account officer who told me to buy some BTC some years back. He told me about it in confidence.

The push for the CBDC often amuses me . Talking down bitcoin and pushing for the adoption of their so called digital currency clearly shows how misguided they’re. Nothing beats decentralization especially when it comes to finances .

I think that the central banks know that they are in danger of desappearing and well before they can bear it.
What is happening is that they are losing power of influence. That is thanks to the fact that more people are entering the world of blockchain and cryptocurrencies.

I think the way to fight is by informing and inviting more people to join this blockchain world.

I agree, they are worried about losing the power and control they've had for a very long time.

Let's say they want to use the priceless technology, blockchain, but they don't want to accept its derivative, cryptos as cryptos don't serve their purpose.

I am not even sure they are using blockchain.

Some banks use or try to use it here.

I love ze CBDC's. Zey are going to mean ve can decide how all you filthy serfs spend ze universal basic income ve are going to make you use when ze dollar is fully destroyed. I cannot vait....

Why discredit something that they want to imitate in the first place except for the issue of control? What makes centralized control superior to a decentralized one? I think this is the question that they need to provide a convincing answer to. If not, by discrediting bitcoin, these international bankers are actually discrediting themselves in the eyes of the market.

Double talk, that's what they specialize in. They are like politicians who say one thing and do another. They say they want to see economic inclusion, poverty reduction, and assist developing nations as well as praising the promises of blockchain technology and yet their action tells otherwise.

I like these new protocols: "Proof-of-Greed or Proof-of-Control." I will praise them if they will adopt either of these two names and they will gain credibility in that regard. lol