You are viewing a single comment's thread from:

RE: HBD Interest Payouts For June 2022

geekgirl (77)in LeoFinance • 7 months ago

Like you I also used to look at these charts and wonder what was going on with HBD prices. These charts are misleading and depending where the price data is coming from the data is not same either. I have two platforms I watch HBD price at and both always show different prices.

A couple of months ago I tweeted the following and received the answer to this phenomenon. 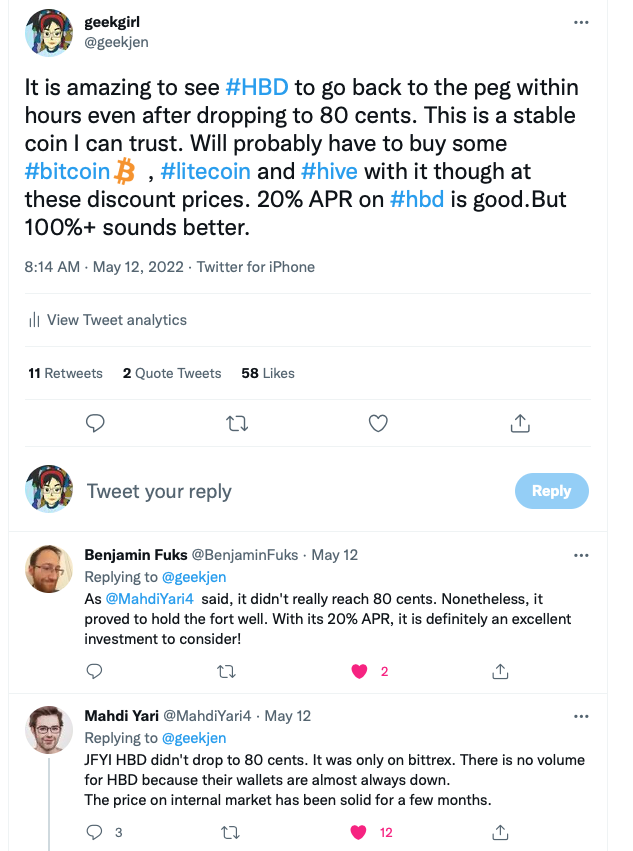 As you can see, I was also noticing the price drop, but was also seeing a quick recovery. What Hive witness, Mahdiyari said explained the situation.

In fact, the HBD price is not actually dropping overall. It is only dropping in exchanges like bittrex where the liquidity is low and people don't really understand how HBD works and its purpose. In the internal market HBD was able to hold the USD peg just fine. In other words you would be able to sell HBD for $1 worth of Hive in the internal market.

When HBD is traded on exchanges, anything can happen to the price because price is determined based supply, demand and liquidity. But when price drops low, there is a quick arbitrage opportunity to make some profits. So, some trades take advantage of this and HBD price recovers back to $1 in exchanges as well.

I hope I was able to explain why charts aren't true representation of the real price of HBD and how it's been holding the USD peg. This make HBD a powerful stablecoin.

The pHBD swap pool price is also a good indication.

That does look a lot more accurate. I will follow pHBD now. Thanks.

Here's what I see right now. Not cherry picked, I just looked right after seeing your reply. Can't really do any better.

“ In fact, the HBD price is not actually dropping overall. It is only dropping in exchanges like bittrex where the liquidity is low and people don't really understand how HBD works“

I appreciate you taking the time to reply very much 👍 any critical takes below aren’t personal but just my feeling on HBD…
If true it wouldn’t drop on a regular basis. Smart traders would buy it up every time after a while. Even on our platform market area I see it drop regularly. So respectfully I don’t buy this explanation at all. I will accept it for the deeper drops 100%
But ur saying maybe .90 like .90 isn’t a problem. If tether went to .95 cents all hell would break loose.

I guess my issue is it’s just not stable. No good will come from spending energy promoting HBD for use outside our platform. It’s like promoting something that sucks at what it’s being promoted as being the best for. I believe it puts regulation authorities on our back and paints an extra big target. I very much appreciate the reply and I do see factually what is said about the deeper dips, I’ll totally agree there but it’s still massively not stable at 1.00 and doesn’t look to ever be. There are stable coins backed by actual value. We should be in the promoting Hive token biz not a so called stable coin that sucks at staying stable.

The 20% interest won’t remain long term also, it’s impossible unless the token breaks down further and the value lost comes outta price instead of APR. Lastly the dollar is garbage and loosing value yearly so after capital gains tax ur not making much anyway and I am no fan of any stable coins really so I’m just gonna stick to Hive and hoping one day we fork out existence HBD all together so it doesn’t exist.

It’s clear the attention and chasing 20% interest takes attention away from Hive token value. Many friends here put funds into HBD that at least some would be in Hive instead. This is another reason I see HBD as a negative overall. I wish I could agree as I’d love having some reliable USD earning 20% interest but I know that’s not possible long term so I don’t risk it. The risk for me isn’t worth a few % ( usd inflation is over 10% and taxes on the 20% must be paid so it’s not even more then 5% earnings broken down)

Now that we can exchange bitcoin for Hive in seconds using lightening network I just think many don’t realize it’s not even needed anymore. But I admit I have issues with most stable coins. The USA government can freeze funds anywhere if in USD. Tether accounts aren’t safe with the US empire being corrupt as it is along with regulatory agencies being anti freedom pigs mainly. Perhaps I’m bias having this take so we’ll see who’s right the next couple years. I’d bet HBD breaks in some way by 2024 and we have to fork to deal with it. I also predict other stable coins will crash also.

I don’t mind negative perspective at all. But you need to back your claims/opinions with some substance. You keep saying HBD will/might break. What makes you think that? Why should somewhere be worried about it?

Just a fluctuation in its price doesn’t say much. It is a traded asset and all traded assets and derivatives fluctuate in price.

There was a time when HBD peg didn’t work at all, then I could have agreed with you that it didn’t serve its purpose. Now it is a completely different. It holds USD peg impressively well. Sure I may have to wait a bit sometimes, but I can almost always get full USD value in return.

Tether and USD backed coins are different. They have or suppose to have USD backing 1-1. Even then you need to trust someone that they actually have the backing. But they aren’t algo stablecoins.

Among algo stablecoins attempts so far HBD seems to have come up with the best solution. As you said USD keeps losing value year over year. Having 20% apr on HBD can be a hedge against inflation for those who see value in USD equivalent.

Regardless what we may think about USD, the world still uses it and it is something familiar for most.

I too prefer to hold Hive instead, which I mainly do. But having some HBD doesn’t hurt either.

I guess it all depends on our investment strategies/plans. But none of this negate the fact that HBD actually working as designed.

There’s so much I disagree with in ur comment, mainly the 20% isn’t safe at all, but let’s just agree to disagree: I refuse to trust any algorithm “stable coin “. Especially one being promoted as better that is not even stable at all. They won’t work long term is my take but smart people like us can obviously agree to disagree.
Regardless of difference of opinion I respect ya ✊
And we agree on Hive itself so cheers to Hive 🍻

For any others reading this and my critical comments⬇️
I care about Hive. If I didn’t I wouldn’t bother talking about what I see as a huge liability to Hive reputation itself when HBD blows. It’s simple math. One day people will see (again in my humble opinion) it but I guess not till it’s 2 late unfortunately. It’s all love and respect ✊

In meantime friends we all want Hive itself to grow and succeed so no need for drama over different opinion on HBD. Heck I remember somebody downvoted me for being critical in 2020 about HBD. So silly 🙃
We all want Hive to win 🙌
Again friends cheers to that! 🍻🍄🙌✊🎸